Despite the fact that the previous year, the Almetrach leader said that they had detected poisonous wild mushrooms, on weekends they have been seen offering these products

San Cristóbal de Las Casas.- Despite the fact that the previous year, the leader of the Association of Tenants of Traditional Markets of Chiapas (Almetrach), Narciso Ruiz Sántiz said that they had detected poisonous wild mushrooms among the dozens of women who year after year They go to this place, this year again for several weekends they have been seen offering these products.

After a tour of the Maria market, about 25 years old, one of the dozens of women who come to sell at this market, said that the mushrooms are collected in the mountains of the community of Tzajalá, ahead. from Betania, municipality of Teopisca, and that she is the one who goes out to look for them, who asks if she knows them well, answered “yes” and that they are called “yuyos”.

In bags and buckets of 50 pesos, women go to the market to offer their products, and canvases are only seen in the markets on the alert of how toxic these products could be if any poisonous are collected due to their resemblance to the so-called “yuyos ”.

Last year, Narciso Ruiz assured that in the “José Castillo Tiélemans” market they had detected poisonous mushrooms among those that are edible, so he made the recommendation to consume this product unless they knew how to distinguish between one and the other. 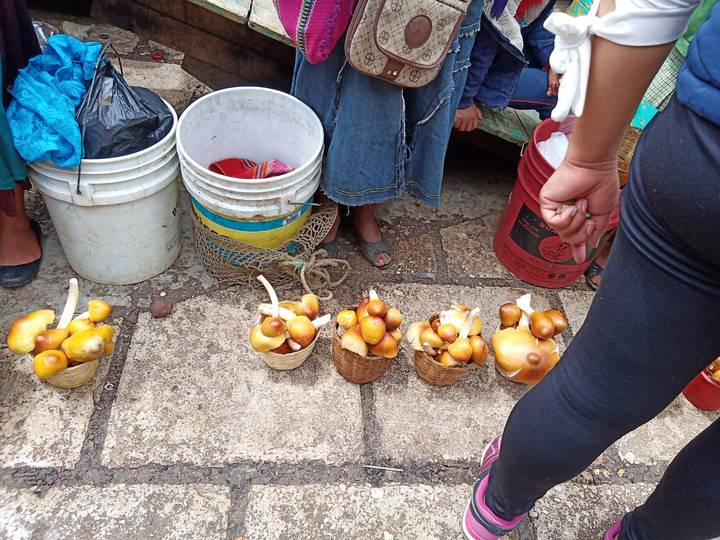 Ruiz Sántiz clarified that the edible mushroom has an oak leaf smell, and the poisonous one is similar in structure but I can distinguish an odor of urine, the other time my friends went to look for poisonous mushrooms and among all those who are selling we found one “, He said.

On June 9, the State Secretariat of Health, through the Directorate for Protection against Sanitary Risks (Dipris), announced a series of preventive actions and recommendations to avoid poisoning by consumption of wild mushrooms, mainly in the Altos Region. Tsotsil-Tseltal.

The head of the Dipris Department of Evidence and Risk Management, Julio César Aguilar Conde, acknowledged that based on scientific evidence, the Altos Tsotsil-Tseltal Region of the entity is the only one with risk in the consumption of toxic wild mushrooms, since which is where indigenous families have deep-rooted uses and customs, such as the collection of wild mushrooms in the mountains.

In the letter, he mentioned that the population should take into account the following recommendations: not all wild mushrooms that grow around the house are edible. If they are not adequately known, harvesting should be avoided; do not pick or buy mushrooms that look like herbs but are white in color, they are deadly; do not collect the mushrooms called San Andrés or Vixil chechev, which grow in clusters at the base of tree trunks, since there is a similar species that is deadly.

The collection of wild mushrooms by inexperienced or inebriated persons should not be allowed; If children attend the activity, watch what is collected at all times; If you buy mushrooms in the market, do it with a person who has already bought before and who has a long time to sell.

Also, before cooking the mushrooms should be checked by an expert person; if wild mushrooms are consumed, keep one of each and keep it in a cool place for at least five days.

If symptoms such as stomach pain, the urge to vomit, sweating, or nervousness occur after eating mushrooms, you should go immediately to the nearest health center with a sample of the ingested mushroom and inform the medical staff how long it has been since consumption until the appearance of the first symptoms.