As part of the reconstruction actions of historic buildings affected by the earthquake of September 2017, Governor Rutilio Escandón Cadenas inaugurated the rehabilitation works for the Barrio Santa Lucía Temple, in the municipality of San Cristóbal de Las Casas, where he underlined the importance to generate this type of actions that dignifies and preserves the cultural and tourist infrastructure of the entity.

After going through and verifying the conclusion of these works, in which an investment of more than 7 million 624 thousand 219 pesos was allocated, the state president indicated that in congruence with the public policies promoted by the Federal Government, Chiapas works in an honest, efficient and transparent way so that the public resource is exercised in the most elementary, such as the rescue of these historical monuments, doing social justice not only in the reconstruction but also with social support in favor of the people who need it most.

“The three levels of government are working closely together and in a committed manner so that these spaces, which represent a mixture of the ancestral culture of the original peoples, are well built. And this temple, which is also a tourist center admired by our local, national, and international visitors, was very dignified and with a solid and safe infrastructure,” he said, confirming that efforts will be redoubled this year to complete the work on the Cathedral and the Santo Domingo Temple.

Escandón Cadenas pointed out that, along with these actions, the State Government concluded with the reconstruction of 3 thousand 160 houses affected by said earthquake; and for this year, he reported, the Federation will leave the rest of the houses ready, so that the more than 22,000 homes are fully restored and that those affected have access to decent housing, which “is a human right enshrined in the Magna Carta and it shows that when the circle of corruption is broken, money is well invested for the benefit of the people”.

Emphasizing that the rehabilitation of buildings has an extraordinary value in the history of the state, the Undersecretary of Public Works of the State, Claudia Baca Esquinca, reported that the investment made in this temple are resources from the Natural Disaster Fund (Fonden), in coordination with the National Institute of Anthropology and History, which made it possible to repair the roof, vaults, and domes, as well as the placement of coffers and painting in general. He reiterated the commitment to continue with the restoration of historical assets of cultural interest.

Recalling that the Temple of Santa Lucía was one of the most damaged after the earthquake of September 2017, Mayor Mariano Díaz Ochoa stressed that with this restoration a beautiful monument is glimpsed, thanks to the support of Governor Rutilio Escandón Cadenas and the president of the Republic, Andrés Manuel López Obrador, for which he reiterated his willingness to work alongside the government, the people of San Cristobal and the Barrio de Santa Lucía.

During his speech, the priest Víctor Manuel Anguiano Hernández, parish priest of the church of San Francisco, expressed his gratitude to the three orders of government for having set eyes on the Temple of Santa Lucía, one more icon that, along with other historic buildings, manages to keep San Cristóbal de Las Casas excellently a magical town.

They were present: the Secretary-General of the Government, Victoria Cecilia Flores Pérez; the Secretary for the Sustainable Development of Indigenous Peoples, Emilio Ramón Ramírez Guzmán; the deputy president of the Urban Development and Public Works Commission of the State Congress, Yolanda del Rosario Correa González; the deputy for District 5, Fabiola Ricci Diestel; as well as businessmen and businesswomen, and residents of Barrio Santa Lucía 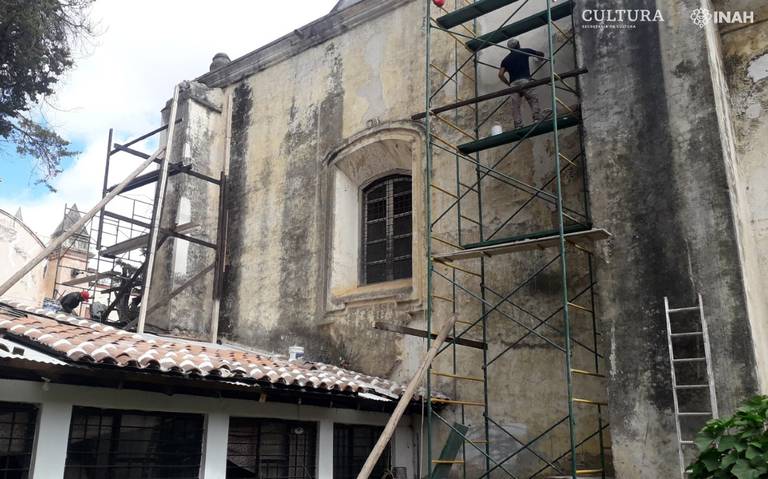 The National Institute of Anthropology and History (INAH) in Chiapas reported that repair work has begun on the Catholic temple La Virgen de La Caridad, as well as the former convent of Santo Domingo, one of the most important historical monumental complexes in the entity, located in San Cristobal de Las Casas

The above, after the fall of a cypress tree and branches of other similar ones located in the north square of the temple, due to the strong winds of tropical wave number 1, a hydrometeorological phenomenon that occurred on June 7, 2021.

The works are carried out with insurance resources managed and supervised by the INAH Chiapas Center, on the tile roof of a room, fence and electrical connection, located north of the west garden.

As well as the arrangement of cornices, decorative elements and roof edges on the west façade of the chapel of the Lord of the Sótano and ironwork in the garden; in the eastern courtyard, due to damage to a galley made of zinc sheeting and to the hydraulic supply.

It should be noted that the construction of the La Caridad church began in 1712 by the Juanicos, establishing itself as the first hospital for Indians.

Its dome with a lantern and windows sheds light towards the splendid Solomonic main altarpiece, one of the best in the city.

Its façade has curious shapes, as it shows groups of pilasters with curvilinear bodies that resemble carvings on wood; some critics assure that such a style was used in Peru during the 18th century and that it came from there.

The interior of the temple preserves a baroque altarpiece dedicated to the Virgin and another to a Black Christ from Esquipulas, Guatemala.

Agua Azul waterfalls: a natural beauty in the middle of the Chiapas jungle (VIDEO)

Sumidero Canyon: a major tourist attraction in the state of Chiapas (VIDEO)