Since last Monday, July 26, access to people has been limited; on the 28th they closed it to journalists

San Cristóbal de Las Casas.- After on July 26, a group of residents of Pantelhó looted houses of alleged “hitmen”, characters close to the mayor and elected mayor of Pantelhó, sources close to the self-defense group called “Los Machetes ”, has said that it will be until Tuesday, August 3, when they again give a position to the media, which is why so far they have closed traffic and entry to the head of that municipality.

The source that does not reveal the identity, explains that the first step was the entry of “Los Machetes” on July 7, when there was a confrontation in which it is not revealed, but there were deaths between both groups “Los Machetes” and ” Los Herrera ”, and agreed to present themselves as such on July 18, where they sent a message to the authorities, through Josefina Elizabeth Bravo, commissioner for Dialogue with the Indigenous Peoples of Mexico, but having no response, they entered to the head on July 26, looting homes and taking the municipal presidency.

And it is that despite the fact that Josefina Elizabeth Bravo took note of the requests of the community members of Pantehló, no response has been given, or at least one position and unless they have been invited to start the election process for their authorities on October 1 for their so-called “uses and customs” as requested.

It should be remembered that on July 26, the residents of 86 indigenous communities and 18 neighborhoods of Pantelhó occupied the mayor’s office and made the elements of the National Guard, Mexican Army, and State Police withdraw about three blocks, maintaining control of the community. from the 7th of the same month, to avoid confrontations, since these authorities, together with the Chiapas Prosecutor’s Office, refused to search houses, which they argued: “belong to the hitmen of ‘Los Herreras’”.

Since last Monday, July 26, when they took control of the municipal seat armed with sticks and machetes, access to people has been limited, and since Wednesday, July 28, they have denied access to journalists who intended to enter the municipal seat, transcending that it is to avoid spreading erroneous information, as there are media “that have discredited the ‘Los Machetes’ movement, calling them racists and expelling mestizos.”

Since Thursday, July 29, a commission of 20 people, peripheralized to allow people, mainly mestizos, who live in the head of Pantelhó can leave the town if they wish, which caused dozens of people to travel to San Cristóbal de Las Casas to take refuge with family and friends, who despite having been approached by representatives of the media in the parking lot of a commercial store, have refused to give statements for fear of being attacked.

The conflict in Pantelhó worsened on July 7, when the group called self-defense groups of the people “Los Machetes” stormed into the capital to “expel the drug traffickers” who in the last 20 years have murdered some 200 people, including the former leader of the Las Abejas Civil Society organization, Simón Pedro Pérez López, who was shot dead on July 5.

After taking the head, the self-defense groups ambushed the military and police on July 8, the balance was nine soldiers wounded by gunshots, in addition to two of their members injured.

It is still unknown whether representatives of the media will be able to enter next Tuesday, after the assembly, they will hold, but they have made it clear that they are reorganizing and appointing new commissions since they have exceeded the number of people they had projected to join. to their cause, which they reiterate is the “expulsion of hitmen in Pantelhó”. 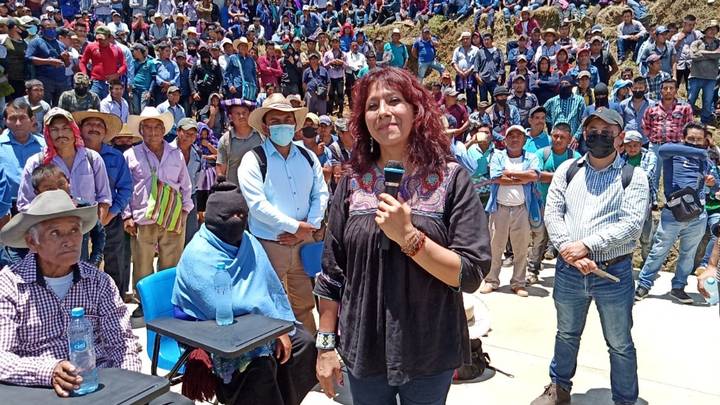 Josefina Elizabeth Bravo, Commissioner for Dialogue with the Indigenous Peoples of Mexico

For the second time this year, Nuevo Laredo is hit by cartel violence after a capo’s arrest

“BANXICO’s synchronization’ with the Fed is conditional” (Galia Borja)